We just returned home from the Pennsylvania Association for Sustainable Agriculture (PASA) conference. This conference always gets us inspired, motivated, and better informed. We come home with new ideas and vision. We meet interesting people and reconnect with the regulars. I’ve been posting lots of links and petitions lately related to Monsanto and Genetically Modified Organisms (GMO) seed, including articles about a court case by Organic farmers against Monsanto. At PASA, I met some key players in the court case, putting some real people into the issues. So let me introduce you to Ira.

This is Ira Wallace, here on the right. She is posing with Sarah Kelsen, Frederick friend of ours and House in the Woods apprentice/workshare. Thanks for the introduction, Sarah! 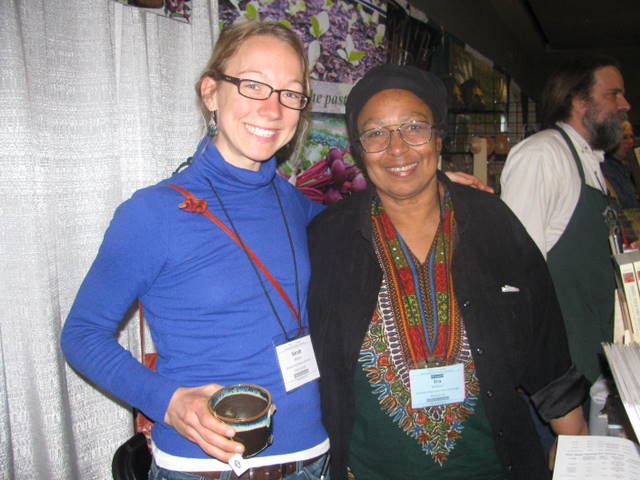 Ira Wallace is the founder of the Southern Exposure Seed Exchange which is a member of OSGATA, the Organic Seed Growers and Trade Association. OSGATA and other collectives of organic farmers and organizations are joined together in a lawsuit against MONSANTO. The lawsuit asks for protection for organic farmers whose crops have been contaminated by GE crops. OSGATA is the chief plaintiff in the case.

I am so glad I had a chance to meet Ira and put a face to the politics–a real human being and a wonderful one at that! to personalize the issue and remind us that there are real people out there doing real hard work for the cause. She has tireless energy on this important cause. She is humble and heartfelt and just trying to do her good work of preserving heritage seed. I so very much appreciate Ira’s commitment to the issues and those of all the people involved in the case. We need to do what we can to support them.

Ira invited their lawyer to come from New York for the workshop about the case and he did! He is such an asset to the case, he really gets it. He is a patent lawyer and pulled together the parties involved to bring this case together. He said to a room full of farmers: In about seven years, I hope to never meet with you people again. You and I should not be meeting together except for me as your customer.

What he’s saying is that patent should not be in between him and his food, or between organic farmer and their seed, or certainly genetically-modified seed. We’re not trying to use this product. We’re trying NOT to use this product. But it flies in the wind and transforms the life spirit of nature’s seeds…and to me, I do not understand why they can claim ownership to transformative life that contaminates other life forces. That’s polluting. This idea “can a company patent life?” was taken all the way to the Supreme Court of Canada in a previous Monsanto case, and I’m sad to say that they decided yes its patentable. However, it was considered a win for the farmer as well, because Monsanto settled out of court and “agreed to pay all the clean-up costs of the Roundup Ready canola that contaminated Schmeiser’s fields” instead of the other way around. I heard him speak on the case 4-5 years ago at the PASA conference, you can hear his voice on the subject in a recording on his website. That’s Percy Schmeiser.

But I digress. So many farmers have been sued by Monsanto since Percy Schmeiser was sued, and now we’re onto this new case, to protect farmers from the company in the business of suing farmers..

This from an OSGATA press release:

The case, Organic Seed Growers & Trade Association, et al. v. Monsanto, was filed in federal district court in Manhattan on March 29, 2011, on behalf of 60 family farmers, seed businesses and organic agricultural organizations, challenging Monsantos patents on genetically modified seed. On June 1, 2011, we amplified our OSGATA v. Monsanto complaint by bringing on an additional 23 Plaintiffs to bring the total to 83. Our plaintiff group now represents over 300,000 members.

300,000 people are suing Monsanto! It is about time we collectively find a way to stop Monsanto. This is a beginning. Its a bit of their own medicine:

“In fact, between 1997 and 2010, Monsanto actually filed 144 lawsuits against American family farmers. In addition, another 700 were settled out of court for unknown amounts. Monsanto has an agenda to take out American family farms and dominate the agricultural industry with their own mutant seeds. This is the same kind of practice that Monsanto operates outside of the United States as well, driving thousands of poor farmers to suicide by ruining their family farming practices.”  http://www.activistpost.com/2012/02/farmers-issue-lawsuit-against-monsanto.html

HOW CAN YOU HELP?

I asked Ira what we can do. She said public comment on the issue really makes a difference, and that our numbers need to add up quickly. Sign those petitions that are going around, it all helps. She is too sweet to say donations help, but I know they do. Donate toward the case Here. Another good organization to support is The Center for Food Safety, they are also plaintiffs in the case. They are leaders in the advocacy against GMO. I would add–stop buying products that include GMO. 98% of all corn products are GMO, and processed foods. Make a pledge to get it out of your diet and stop supporting Monsanto products, and you will be healthier while taking down the giant with your buying power.

Want to get to know Ira a bit more? Check out this bio from Mother Earth News:

This entry was posted in Events. Bookmark the permalink.