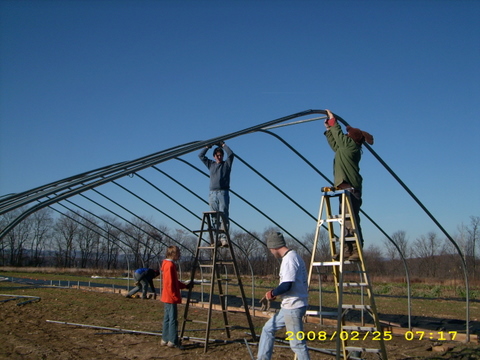 We are feeling very “eastern shore”…we are building a high tunnel hoophouse on our farm this year. Wow, how great this will be! Imagine…tomatoes go straight in the ground as younger plants in April instead of being repotted for another month in the greenhouse. That cuts out a step for us. Early tomatoes ripen in June! And when it rains, the skins of the tomatoes won’t split, because they are protected in the hoophouse. That’s a lot less rot. Watering is done by the drip tape irrigation that we already rely on. And I think we will be able to keep greens growing almost year-round in the hoop for our family, without ever heating this thing.

And a thing it is…30 feet across and 100 feet long. The tractor will fit right inside to work the soil. Its high too, maybe 12 feet? That’s a lot of metal…over 4000 pounds of metal tubing. Lucky us, Phil got an email about a used hoophouse for sale in St Mary’s County last fall. So we bought our hoophouse third hand and for a deal (they are $5-8K new).

So here’s how “shipping” it went–Phil and my dad drove to St Mary’s County (about two hours+ away from Frederick), and rented a U-Haul one way. They drove to the seller’s house, where there were neat little piles of metal pipe, all taken apart by the seller’s teenage son and friend. Paid the kids for disassembly time (what a great offer that was!). Met my uncle there too, he lives near the seller. The three of them (yes, Phil and two hard-working men over 70) loaded the truck with 4000 pounds of pipe. Phil drove the truck home, avoiding the weigh station, and Dad followed in the car. Noah, Dad, Phil unloaded the U-Haul…its still 4000 pounds of piping, again, Phil said.

We had a couple CSA Hoophouse Raising days. Thanks to all who helped move the pipes around! Those were fun days and very productive. Pipes were categorized by length and type (see Hoop Art photos), pipes were balanced on shoulders and relocated to the garden, pipes were inserted in other pipes and then you have the graceful arches of the hoophouse. I went out to the garden one windy day and heard these ghosty whistle sounds, they had a ring to them…the wind was whistling through the pipes like blowing into a bottle!

And yet, there are still piles of pipes on the ground, albeit much less poundage. Lots of reinforcing trusses still need to go up before the end of March. That project is resting while a few other projects take center stage–a trip to Florida (done), delivery of a new Veggie Shed (done, see New Veggie Shed post), prepping the greenhouse for spring seedlings (just finished). And we just started planting early spring seedlings in the greenhouse, so spring is coming soon, I know it.

This entry was posted in Events, Hoophouse, On the Farm. Bookmark the permalink.